Skip to content
Artist and Proud Canary David Shenton has been working with Along Come Norwich and Barclay End Norwich for  something very special prematch at the Liverpool game. The element of surprise is key – make sure you get to your seats early.

David has also produced a magnificent design for a Justin-related Proud Canaries scarf. The double-sided scarf  marks both the 40th anniversary of Justin’s  Goal of the Season (v Liverpool) and the respect Justin is due for having the courage and determination to be out as a gay man in the hostile environment of football. The scarf  features a description of the goal, and on the reverse side the Proud Canaries logo is set on a background of a rainbow flag – specifically the People of Colour version – with supersized stripes for the yellow and green of Norwich City Football Club. Scarves will be available from the Liverpool game day onwards for £10. Keep an eye on Stephen Fry’s Twitter acc for a preview selfie! 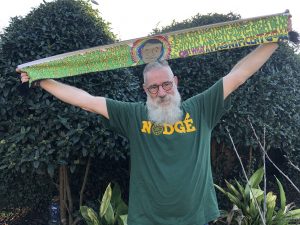 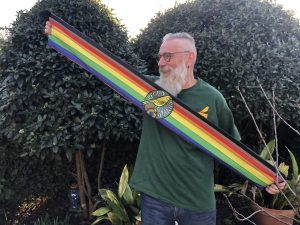 Meanwhile here’s one modelled by David